Scrubby Dubby Saga is one of the games made by King. It was released on several countries in late July 2015 and was developed by King.com.

This game is a variation of "match-3" games. Each level has a different shaped grid filled with soaps of three to six different colours (Red, Orange, Yellow, Green, Blue, and Pink) and sometimes obstacles. The basic move of the game consists of dragging entire rows and columns to align sets of three of the same colour, whereupon they disappear, causing soaps above them to collapse into the space left behind, often resulting in chain reactions. Moves and alignments must be horizontal/vertical. The level's objectives must be met before the player runs out of moves. In each case, the player must earn enough points to get the first star (out of 3) in the scoring system.

Slide the soaps to create a path and travel through this strange and wonderful world in search of your missing friend. Along the way you'll meet a host of characters and play through some challenging levels.

Will you be a soap star and help the gang to reach their missing buddy?

Soapland is full of a mysterious foam but nobody knows why. Enter this adventure puzzle, slide soaps and unveil the secrets as you remove the foam on your way. Will you be a soap star and save the day?

Take on this fantastic Saga alone or play with friends to see who can get the highest score!

There are currently four different types of levels:

If the player succeeds in reaching the goal in the levels, the game does a "Soap Star", starting an automatic bonus round where the player's remaining moves are used to increase the score through creating various bottles on the board. If the player does not gain one star from his or her score, a life is deducted. The player is given a default number of five lives, with each life restored after a half hour. The player has the option of asking friends for more lives, or buying a life restoring item.

The bottles are created when combinations of four or more soaps of the same colour are matched together.

Other various "boosters" can be purchased, such as the soap hammer, which can clear one soap from the board, or the increased moves boosters.

Obstacles, or blockers also appear in levels. These include the resistant-to-bottles steel plates, the bombs that turn 3×3 soaps around them with steel plates or nuts if they are not cleared before their move count runs out, and the nut that require multiple matches to eliminate. The board will also contain fixations, which are soaps in "cages" that their column and row cannot be dragged until they are matched, and sponges, which hold a soap, nut, bomb, pearl or a bottle and cannot pass through a wall. 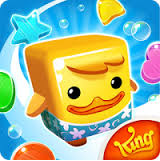 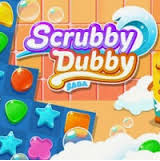 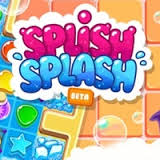 Main screen on mobile (new)
Add a photo to this gallery
Retrieved from "https://scrubby-dubby-saga.fandom.com/wiki/Scrubby_Dubby_Saga?oldid=25886"
Community content is available under CC-BY-SA unless otherwise noted.